CHIWAMBA DIES ON THE CROSS 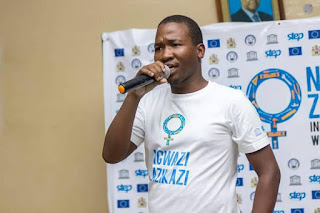 Home grown literary sensation, Jack Mapanje, would often times start his literary pieces with the art of imagery to unveil the bad deeds rendered by the then regime towards the silent majority, as a favorite author of mine. I would duplicate his style if I could, but he was a genius born to write without difficulty whilst for me to put down something, I write down with bitter blood, with utmost effort, with sour gall well blended with shame and guilt. But all the same for a poet is before anything else, a person who passionately fell in love with language, and lucky me, I happen to be betrothed to linguistics.

It is with reference that Poetry makes the nation go round, imagine a Malawi without the likes of the evergreen, Okoma Atani Malunga, the vibrant, Aubrey Chinguwo, and the issue based ,Robert Chiwamba, best famed for his breakthrough hit “muzafa imfa yowawa”. Over time literature in the nature of poetry has been used as a fighting mechanism against all sorts of oppression, and also in showcasing ones grief, happiness, sorrow, love, hate you name it. Bestselling anthologies are what they are because of literature best described poetry.

It won’t be translated as mere exaggeration if I go open blank to bear witness that secondary school would have been hell on planet earth if not for Shakespeare’s series of classics, the tragedy of “Romeo and Juliet” left our faces flooding with tears of joy. Like the romantic shivers aroused by romantic lines which read “when Romeo saw Juliet it was love at first sight.” Not to mention of the political classic, “Smouldering Charcoal”, it left many a great number of us with a sense of origin and that in itself is a miracle for rivers that do forget their origin easily dry up.

It is beyond human belief to say that literature is not in other people’s vocabulary, how art thou hard to endure in a world without readings. For the eye’s responsibility goes past fulfilling and appreciating the visual living creatures and statues.

Nevertheless, it is of paramount importance to censor the nature of the content for all that glitters is not gold. Some poetic products tend to be propaganda oriented and not for a good cause, as such one turns into the biblical meaning of a prodigal son.

The genre of poetry that we opt for is derived from our own behavior mirror, if you fancy warfare poetry then time nurtures and embraces you into a war veteran. If you’re in frequent contact with something, you are joined into holy matrimony as it becomes the true definition of a perfect soul mate. For one Becomes part of that something and that something becomes part of him/her. As it is with belief that there is some poetry which is not youth friendly, especially when it reaches a vulnerable audience.

As a nation, its best we acknowledge the implications of negative poetry as it yields brainwash, violence, drug and substance abuse, juvenile maladjustment, mental disorder and the list is endless. Some poetic lyrics tend to advocate sexual intercourse, drinking and debauchery, teen dating, obscene language, and drug abuse.

The lyrics always talk about sex, binge drinking, drugs and violence. According to poetry, all these are said to be good, nice and sweet. However, what our unsuspecting minds quickly switch to whatever the famous poets are scribbling. Thus the youths end up in multi sexual relationships, alcoholism and other harmful behaviors, and such is bad for development in the long run.

It’s on a sad note to learn that poets enjoy the benefit of a life contrary to their work, furthermore there are totally different from what we witness in their literary works.

Yes! It won’t be welcomed as news if we say of the many problems that are being faced by the youths in the country. On the other hand, it won’t be fair to attribute all the blame on poetry. There are also other nice poems that are informative on issues of sexual reproductive health rights and civic education at large. Such poems have positively contributed to the prevention of HIV, teenage pregnancies, drug and substance abuse and other harmful behaviors among young people.

A classic example is that of, Robert Chiwamba’s, advisory poem“Mukapanda Kupewa” it’s a piece that is illuminating some of the dangers of indulging in unprotected sexual intercourse and acts of such. The persona makes a point to the youths on the need to abstain; where not possible then condoms should be an immediate remedy. The narrator opts for a sombre mood just to express thy magnitude of grief upon seeing the many a great number of souls with which the deadly HIV virus is busy claiming day in and day out.

Another classic is “Malapiro Pa malawi”, it’s a verbal poem that Laments the trending salary inclement and also has room to advocate for salary adjustment, for sometimes the youths indulge in wrong acts because they are lacking a financial muscle to carter for their needs. In a country where salaries are not worthwhile low cash flow takes shape, people will do anything in their prowess to make sure they don’t die a financial death, and that spells doom for the vulnerable minds, for some will go as far as indulging in commercial sex to make ends meet.

As such, it would be better to provide better salaries to the youths and the majority at large on whatever job that they have done.  As such there is need for government to take immediate action.

Ooh indeed! Chiwamba has played martyrs having scribbled and recited that one poem “Mukapanda Kupewa” and the newly released “Malipilo Pa malawi”.
Posted by Ntcheu Young Bloggers at 01:19